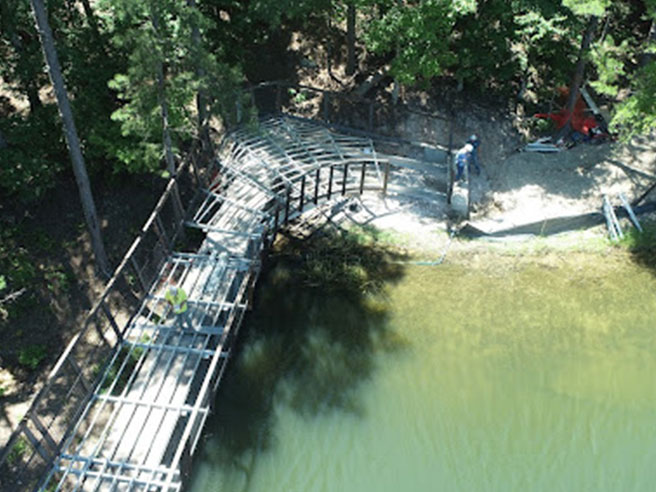 The first water supply dam built for the City of Hot Springs (CHS) was constructed in about 1881. Known as Bethel dam, this cut stone masonry arch dam with unconsolidated rubble filled core, is believed to be the oldest dam in the state of significant size by Natural Resources Development (NRD), the governing body for dams in the state. Dillion Dam was the second water supply dam constructed in about 1903.

Dillion Dam is a cut stone masonry arch dam. Sanderson Dam was the third dam constructed for water supply and was completed in about 1927. Although these three dams are no longer utilized for water supply, NRD categorized all three as being a significant risk hazard structure. Meaning if any one of the three dams were to fail, significant property damage and or loss of life is expected to occur downstream.

In 2018, CHS hired Crist Engineers to address stability/safety concerns at the three dams located north of downtown Hot Springs. A stability analysis was performed and as a result, four dam remediation and
improvement projects were identified and implemented. As part of the stability analysis, Anderson Engineering Consultants, Inc. was consulted to provide geotechnical engineering services.

Vertical coring’s were taken from the top of dams all the way through the dams into bedrock. The coring’s recovered were used to eliminate unknown variables at the dam to bedrock interface.

With these variables now known, adequate factors of safety with respect to overturning and sliding were achieved. Thus, eliminating the significant risk category placed on the dams by NRD. With leftover project funds remaining, CHS Utilities Department gave strong and careful consideration to further improving safety and access of the dams. The result was a bridge to be placed atop Sanderson Dam.

Weathering steel was used for the bridge’s visible components while the other members were hot dipped galvanized. The handrails and mesh wire used on the guardrails were powder coated and stainless-steel tamper resistant fasteners were used in securing bridge components for added security. The bridge was designed for 100lbs per square foot which will accommodate crowds and ATV traffic. Members of CHS staff were actively engaged throughout the design and construction process.

In the fall of 2020, construction cost for the bridge was estimated at $625,000. The actual cost for the finished product came in at $553,000. Between the project coming in under budget and meeting the schedule requirements, the result was a success. Substantial completion was reached in July 2021 and the bridge was opened to the public in August of 2021. CHS’s needs for improving access and safety were obtained with the new bridge.

Interested in becoming a part
of our team? See our career
opportunities